I’ve got my next Vegas trip planned.  It’s not for a few months yet, but I’m feeling the excitement already.  Time to breathe a little life into this blog.  I’ll be staying at a time share property just off the strip which I’ve done a few times before.  I think I’ll be able to discuss that option in a future post as it will be my 3rd different time share property there.  I’ve only really reviewed one hotel in this blog so far, and I thought tonight I would build on that.

I thought here I would write about my stay at Planet Hollywood.  I have fond memories of it.  What I can remember anyways.  This trip was my stag, and the mission was to organize a 5 day trip to Vegas for 8 guys, most of whom had never been there before.  This was one of my favorite trips because it’s the only time these 8 guys had travelled together.  We just couldn’t get time and money organized when we were younger, and when we got older, we just couldn’t get time and money organized, but in a different way.  A lot of guys went through a lot of turmoil to make that happen for me, and I love them for it.  I remember being at an airport (in Denver?) waiting for a connecting flight, and we were all stuffing pizza slices into our faces as quickly as possible.  At that moment, in my mind it was already the best stag a guy could ever have, just to have my boys there with me.  Of course it got much better with our arrival in Vegas.

Most of us were broke as shit, I’m not gonna lie.  I had to be fairly sensitive surrounding the booking, and trying to get it into a reasonable price range for everyone.  We started by choosing a weekend in late January, which is probably the slowest weekend in the 52 week Vegas calendar.  There were deals to be had.  It’s a no-brainer that we wanted to stay on the strip, but where did we want to live on the 3-5 star ranking system?  Seemed like the boys didn’t want to totally cheap out on accommodations, but they couldn’t afford to break the bank, so 4 star hotels seemed to be the move.  Hotels that were in the mix included Mandalay Bay, MGM Grand (which I’d stayed at recently, was so big, I thought we’d never find each other in there), New York New York, Monte Carlo, Paris (but for a stag?), Treasure Island, and I think Harrah’s was in there for some reason.

Planet Hollywood usually lives on the higher side of the price range for 4 star hotels on the strip.  It was a long shot at first, but there was some sort of promotion going on that weekend that evened the playing field a bit.  My impression of PH before I had stayed there was that it was a good ‘stag’ hotel.  It’s kind of darkish in the casino, and most of the time they have games dealers that are extremely hot women dressed up somewhat playboybunnyish if that’s a word.  So it’s a nice walk-through, but maybe not for everyone.  It’s hip, and has a party atmosphere, but feels a lot more accessible than some of the other hotels.  I like it for the 20-40 crowd, which is what we were at the time 😉

The rooms are clean, comfortable, but borderline tacky.  Each room has a theme with some memorabilia from a movie that may not be so memorable.  We all stayed on the same floor (except for a couple of buddies who were at the PH Westgate which is the attached tower in behind Planet Hollywood), and I had a look at their rooms, and I don’t know any of those movies.  That said, who cares?  The rooms were adequate, let’s move on.

If I have one complaint, it’s that the elevators are so well hidden, that after 5 nights there, I still wasn’t too sure where they were.  I feel like the location changed every day.  I feel they do this intentionally, so I’ll get frustrated looking for them, and need to take a rest, and while resting I’ll put more money in their slot machines

This was my stag trip.  After the second day, I completely forgot I even had my camera with me.  I have hardly any photos from that trip, and none of PH.  I can tell you this…. One guy ate at ‘Planet Dailies’ just about every day because he had a crush on a waitress that worked there.  Another buddy ate at Earl of Sandwich on multiple occasions and swears by it.  Man, I had trouble pulling guys out of their comfort zones.  These places are great for casual dining.  I’ve also eaten at Gordon Ramsey’s BurGR which is also sensational, and makes my top Vegas burger list below.

Other random reasons to stay at Planet Hollywood, should you be considering it……

– The ‘Miracle Mile’ runs through it.  This is a shopping center with some decent restaurants, and I’ve eaten at a few and been happy.  You gotta have a few spots near home base just in case you didn’t think through your dinner plans.  Also, nobody wants to stray too far for breakfast or a good coffee.

– There is a huge 2 level Walgreen’s attached to it.  I always find myself there for one reason or another.  Snacks and supplies my friends.  Also, this particular Walgreen’s has a huge walk in beer fridge.  Sometimes you need some hotel beers, and some walking around beers (I’ll mention here to first timers that you can indeed walk the strip with a bottle of beer in your hand).

– They seem to have a lot of shows.  Britney Spears is there right now.  I can’t say I’m into that, but I did really enjoy the Beatles tribute band that performs there.

– Garrett’s Popcorn.  I know I mention this in every post, and I know that it’s a Chicago thing, and not specifically a Vegas thing, but you must try it if you haven’t, and it’s in the Miracle Mile.  The last couple of the years I’ve noticed the grocery store is filled with wannabe Chicago Mix popcorn brands.  This makes all other forms of Chicago Mix seem ridiculous.  I’d almost stay at Planet Hollywood just to be closer to it.

I’m stopping at Garrett’s because it’s the only other PH photo I have that worked out.  There is one taken in my hotel room when we were getting ready to go out.  The behaviour had already deteriorated so badly at that point, that I don’t feel comfortable showing it.  It in no way would make you want to stay at a hotel with lunatics like this. 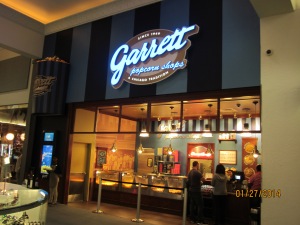