Wow, my first Paymevegas.com blog post actually being typed and posted from Las Vegas itself.  Seems like a long journey.  How did I ever think I could do a blog about another city without going there to do more research?  Life gets in the way of Vegas sometimes.

Today I wanted to do a post that would be universal enough that I might be able to post it in thoughtsandrantsinjoggingpants.com as well.  Kind of a lazy move that I don’t usually like to do, but as I’m typing this, I’m sitting in a hotel room at the Cosmopolitan hotel, fully equipped with a bottle of Blue Moon that I got for free while gambling (free my ass, it turned out to be the most expensive bottle of beer ever purchased, if you’re counting the money I was losing while waiting for it to arrive), a day old bag of Garrett’s popcorn (which is supposed to be consumed the day of, but tastes better a day old than all other popcorn no matter what day), and I’m watching a TV station called Palladia which seems to be nothing other than classic rock concerts (I’m watching Queen live from Montreal in 1981), so I won’t be writing two separate blogs!!!  My wife took her mother and aunt to see Human Nature at the Venetian, so I’m on babysitting duties as my son is fast asleep in the other room.  This will allow me to blog and slow the rate of me losing money in the casino.

Here are some Vegas observations from things I’ve noticed the last couple of days.

– If you travel to Vegas with a baby who is sleep trained to go to bed for the night at 6:30 pm Eastern Standard time, and you decide to bring this baby to a place like Las Vegas, or any other place that’s on Pacific Time, you have to be prepared for this baby to want to go to sleep for the night at 3:30 pm, and want to wake up for the day at approximately 3:30 am.  Obviously as the days go by, you can inch him closer to a respectable time, but we’re only here for 4 nights.  He has yet to sleep in past 4:30 am.  My wife tries to let me sleep until 6 am.  I love her for that, but these are not the Vegas vacations of old.  That said, it’s still far better than being at home where people are sweating icicles.

– Anytime you’re in Vegas with a first timer (my mother in law), you usually want to take them for a walk up and down the strip and into all of the famous hotel properties.  As we passed through Belllagio and Caesar’s Palace, I couldn’t help but notice how many high-end jewelry stores there are.  So you can walk right out of a casino, and right into a jewelry store.  I’ll probably never know what it’s like to have the disposable income where you can blow a ton of money in the casino, and still have money left to buy jewelry, artwork, or a car.  Oh to be a high roller…. I wonder if this is a way for the hotel to get back any money won from their casino……’yeah you hit the jackpot alright, but if you buy a diamond necklace that money’s staying right here’.  Or perhaps it’s a ‘hey buddy, feeling guilty about all the debauchery???  Why don’t you get something for your wife that says sorry I was at a strip club on our anniversary, honey’.  Either way, I give Vegas full marks for ALWAYS thinking of everything.  There is no indulgence that isn’t right at your fingertips here.

– I’ve seen a bunch of movies with Las Vegas as the backdrop.  I really like watching them now so I can see what hotel something was shot in, or see a scene from somewhere I’ve been recently.  There’s no movie that Vegas has capitalized off more than The Hangover.  In that movie they stayed at Caesar’s Palace, and the gift shop there has close to 10 different shirts with Zach Galifinakis on the front with a quote from the movie.  I even saw a look-alike out on the strip with a fake baby strapped to him taking photographs with tourists for tips.  If you never saw the movie, I’m really not sure it needed to be a trilogy, but the first one was brilliant.  Great laughs, awesome Vegas shots for the enthusiast.

Well that about covers it.  Freddie Mercury has done a costume change near the end of this concert I’m watching.  His outfit is fruity by the fruitiest of standards.  Not that I want to see it, but I’m morbidly curious to know if his balls are going to fall out of these shorts or not.  That said, he was awesome, and the rest of the band doesn’t get enough credit.  They were sensational.  Got a bit more gambling to do tonight.  Gotta remember to take some pictures to use in future blogs tomorrow.  Hope Thoughts and Rants fans enjoyed my Vegas post.  🙂

Is Las Vegas a ‘baby-friendly’ town you ask?  It really depends on the baby.  There’s not a lot that a baby can do in Vegas other than be a baby.  They would do that at home anyways, so does location really matter?

My wife and I decided to go to Las Vegas when my son was 3 months old.  I was just looking through some of the pics feeling a bit nostalgic about the trip.  I’m not going to lie and say that it was my best Vegas trip ever, but if I had a choice between being there with a 3 month old right now, or here typing, I’d do the trip again in a heartbeat.  We were at a stage where we were mentally and physically exhausted.  We needed to get out-of-town for a bit.  My wife had heard tales of babies flying for free, and wanted to test this out.  She was on maternity leave, and was going to have to sit around at home anyways.  Why not sit around in Las Vegas.  It was January after all, and in Toronto that means you can’t (or shouldn’t) be taking a baby out in a stroller.  In Vegas, January is perfect spring weather by our standards.  There’s no snow, and while you still have to bundle your baby up a bit, you can get away with a light jacket.  Perfect for pushing a stroller around.  There are times of the year where Vegas would be way too hot for a baby.  I also like January because it’s low season, and there’s great hotel/flight deals to be had.

There were some crappy elements to this, but there seemed to be a silver lining for every cloud.  We couldn’t really go to too many nice restaurants.  Mostly buffets, and casual places in case our baby lost his mind in the middle of our meal.  We were also forced to eat dinner at about 5pm which meant we never had to wait for a table.  We stayed at the Cosmopolitan in a gorgeous room, but they didn’t have a crib there.  Which is understandable as babies are not their target market.  Our son wasn’t sleep trained yet anyways, so having him in our bed was no great setback at the time.  We had to take turns gambling, because babies aren’t old enough to gamble, and a security guard will kick you out if you try to pull a stroller up to a slot machine.  This way we could only lose money half as fast.

Between my son, and my sister-in-law’s kids, I’ve been on 4 or 5 baby-vacations.  Even if you go to the most kid friendly places (Orlando), I’ve learned that there are always compromises to be made as a parent.  Naps, feeding, diapers, bedtimes happen whether you’re at home, at an appropriate baby spot, or Las Vegas, so you might as well go to Las Vegas, and take that compromise vacation, and just be happy that you’re not stuck at home.  Grab a Beer and a Pina Colada, stick them in the stroller cup-holders, and go enjoy the strip.  It won’t be like your bachelor party, but you can definitely have a good time! 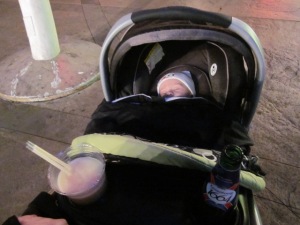